The revolution is not being catalogued

Games have been called the artform of the 21st Century. Not just videogames, though those are most commonly recognised as such – games of all kinds. Games have been around as long as the written word, but an extraordinary profusion of creativity around them is bringing them out of the living room and into the public eye.

The market for non-electronic games is huge, generating billions of dollars – and growing – to accompany the billions now routinely made by videogames. On crowdfunding platform Kickstarter, USD$150,000,000 has been raised each year for the last few years in funding for videogame and tabletop game projects. In personal conversations, game store franchises are reporting year-on-year growth of 25% for 5 years straight now. That’s a tripling of demand in a phenomenally short time.

More importantly than the market, the audience for games is expanding, with almost everyone now playing games – though it’s more accurate to say that the game-playing that almost everyone has always done is now being more publicly acknowledged and discussed. 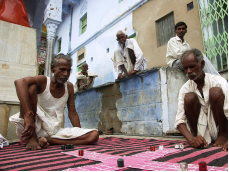 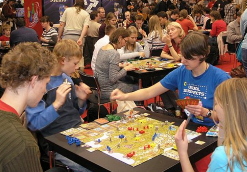 And it turns out that along with an audience more willing to own and reflect upon their play comes an increasing maturity and sophistication. The topics, social dynamics, and system mechanisms being explored through games are the subject of constant innovation. On the flipside, so too are the ways in which games and gamelike activities can inform, enlighten, and delight  – and manipulate, exploit and deceive – their audience.

Libraries can’t afford to remain oblivious to this extraordinary proliferation of new cultural forms around us. Both the positive and the negative innovations require intelligent, literate conversation about games and play, which we could be fostering just as we do about books and reading – but we don’t. It’s a betrayal of our mission to support the intelligent, critical, engaged sharing of culture and information.

It’s also a waste for us. When you look, games and libraries are a natural fit. Play is rooted in the human drives to learn and connect with others. Games are a fundamentally community-based artform – and, like books, unfold because the audience invests attention and engagement. Games and play can, and should, work in and for libraries.

I want to help make that happen.

Browse my site to learn more about me and what I do. Then email me (pm [@t] philipminchin.com) or use the form below to talk about how I can help your library make the most of games and play.

RSS Feeds for this site